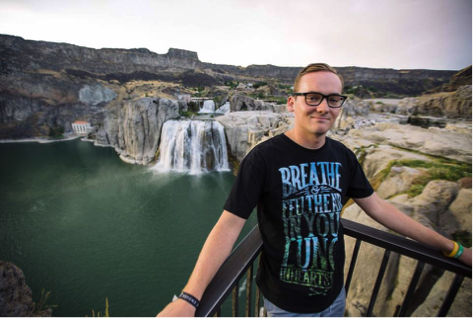 Hey everyone! I’m Casey, the newest member of Green Dot GCKY. I recently moved here from Erie, Pennsylvania. I’m 24 years old. I graduated from Penn State University in 2015 with a Bachelor of Arts Degree in Political Science (O’Neill 2030). Here are important parts about what makes me, me!

Sports: A vital part of who I am. Usually if you can’t get a hold of me, it’s because I’m cheering for a team at a local stadium. If you know me, my sports allegiances don’t make the most sense, geographically speaking. My favorite teams are:
– Orlando Magic (NBA)
– New York Giants (NFL)
– Boston Red Sox (MLB)
– UCF Knights/Penn State Nittany Lions (NCAA)
– Erie Seawolves (Minor League Baseball)
You’re probably wondering, how anyone could like a New York football team and a Boston baseball team? Trust me I know, it’s odd but that’s just who I’ve been since I started actively following sports when I was a kid.

Music: I’m not sure who I would be without it. In the 5th grade, a friend of mine introduced me to a punk band called Blink-182. From that point on, I was hooked! They’ve been one of my favorite bands since. In August 2016, I crossed it off the bucket list when I saw the live in concert in Pittsburgh, PA. I mainly listen to alternative bands that you would not hear on the radio. This genre of music can be found on Vans Warped Tour every summer. I attended my first Warped Tour in 2010 and have not missed one since. This past summer I was given the incredible opportunity to work on the entire tour representing the mental health non-profit organization: To Write Love on Her Arms. 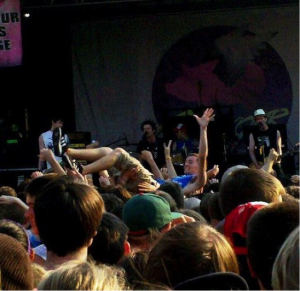 While on Warped Tour 2016, I traveled to 41 cities throughout the United States! It was the best summer of my life. I had the pleasure of sharing a tour bus with the band, Tonight Alive. They are from Sydney, Australia and you guessed it, their accents are just as incredible as you’re imagining them (close your eyes and say “How ya going mate?” in your best Aussie accent). I can thank this tour for getting me to where I am now with Green Dot GCKY because it’s where I met Jamie Sivrais, who was representing A Voice for the Innocent! 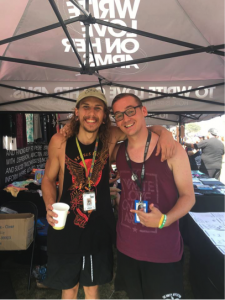 My friend Garrett of the band Silent Planet at Warped Tour Pomona, CA

Favorite Bands: August Burns Red, The Wonder Years, Silent Planet, Architects (UK), Yellowcard, Turnover, The Ghost Inside, Sum 41, Into It. Over It, Pianos Become the Teeth, Expire, Counterparts, Wage War, Blink-182, Green Day, The Amity Affliction, Death Cab for Cutie, Gates, The Devil Wears Prada, Hundredth
Home: I was born and raised in Erie, Pennsylvania. My hometown taught me at a young age that when it rains it pours…. and snows, sleets, hails, cats and dogs, etc. What I’m trying to say, is that Erie is known for its not so nice weather. We are ranked nationally every year for how much snow we get (well over 100 inches). But I will say the summers are fantastic if you’re looking for a nice vacation!

I come from a family of 4 kids and a beautiful Siberian Husky named Jewels! My two sisters, Shannon (20) and Judy (20) were adopted when I was in the 1st grade! This was such an exciting time in my life to welcome two sisters into the O’Neill family. It has been a joy to watch them succeed. My brother Brady is 29 (and going on 30 in a few months!) and has a beautiful daughter named Sophia! Uncle Casey is one of the best titles I’ve ever had. She will be 8 in August and I love being able to give her guidance as she grows up.

I hope you all got to learn more about me through this staff spotlight. I am excited for my future here in Kentucky and how I can continue to better myself and Green Dot! 🙂